Ever thought about streaming audio or video while online and be able to play HD video, high quality music while offline? 5KPlayer for Mac OS can do more! It is a blend of HD video, music and radio player, yet at the same time offers AirPlay media streaming. That being said, it allows seamless streaming of YouTube videos and comes bundled with a downloader as well.

When it comes to media file formats it can play, it’s built with one of the best media codecs, all totaling to over 420 in number. It can play from the simplest formats like WMV, MP3 and MP4 to less familiar formats such as FLAC, MKV and M2TS. Categorically, it can play MP3, WMA, AAC, AC3, ALAC and FLAC audio files. On the video side, it can handle MP4, MKV, M2TS, AVI, FLV and WMV formats. And yes, it can decode 4K, 5K, 8K as well as Ultra HD video files.

It gives a seamless of media playback of all file formats of radio, video, audio and DVD.

Thinking about directly streaming a video on any site? Be it YouTube, Vimeo, Facebook, DailyMotion, Vevo, Metacafe or any other video hosting and streaming sites, it can be counted on to do that. Want an audio version of the YouTube downloaded video, with a single click it does so at super speed.

The AirPlay feature brings music and video to life. It allows wireless video and audio streaming from iPhone, iPad as well as iPad to Mac. For those who’d like to go wild with their entertainment, 5KPlyer for Mac allows streaming of media from Mac to external speakers and Apple TV.

If the internet speed isn’t good enough for fast downloads, then why not screen record? With the high-end Air Mirror and the screen recording capabilities, the player enables seamless mirroring of the display and then screen recording it into high quality media files.

About the interface, the user friendliness is adorable. Its built with a great aesthetic appeal that perfectly blends with its posh colors. Its media library if also more intuitive. Virtually every functionality is easily accessible to the user. It requires no advanced software usage skills to be able to use it.

5KPlayer for Mac OS also has easy to use fine tuning settings that enable users to adjust the saturation, brightness, contrast, hue and gamma to achieve a high quality and detailed video. 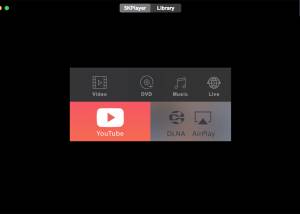 What do you think about 5KPlayer for Mac?

Last versions of 5KPlayer for Mac

Downloads of 5KPlayer for Mac freeware

Get the latest freeware updates and news directly in your inbox. By clicking on "Subscribe" above, you are agreeing to the Terms of Use and the Privacy Policy.
© 2023 TopFreeware  |  All rights reserved.
created by FAUST