GoodSync for Mac is definitely a remarkable tool for the synchronization of various files between a number of platforms including mobile devices, computers and the cloud. It comes with an elegant user interface which features amazing attributes. The tool is also very robust and is renowned for its fast paced synchronization process.

The sync tool for Mac is free. But, it only works as a full version for a total of 30 days after which it becomes limited to features of the free version. You can extend the number of synchronization features by simply subscribing for only $29.95.

If you have prospects of synchronizing files between mobile devices, computers, and the cloud, this is the software that you should use. It is compatible with most of the cloud servers that are available. As a matter of fact, you can use it for any cloud servers that are available today including SkyDrive, Google Drive, Amazon S3, Azure, WebDAV and FTP.

One of the most notable reasons that make the software popular is the fact that it is the best way to dispel any possibilities of failing to gain access to your servers or storage platforms on various devices such as mobile devices and computers. This also means that you will be enabled to access files stored on various devices such as computers, tablets and smartphones from anywhere on the planet. Further, you are also guaranteed 100 % and security and the undistorted nature of your files. Security is one of the major priorities of the software.

Not only are you able to synchronize files between a variety of devices such as mobile phones, the cloud and the computer. But, you will also be able to back them up as often as you wish. This attribute of the software completely eliminates the chances of losing files once one storage platform or device crushes.

The tool does more than just enabling you to successfully synchronize files between various devices including tablets, smart phones and smartwatches. Most notably, it can enable you to back up files as often as you want depending on your personal preferences. This means that you will not need to worry about losing your precious files in an event of a crush or damage to a specific device you are using. This feature is compatible with Skydrive, S3, a number of portable drives, DAV, FTP and GDocs among others.

The synchronization process of the tool is very fast. It also enables users to sync multiple folders in a single click. 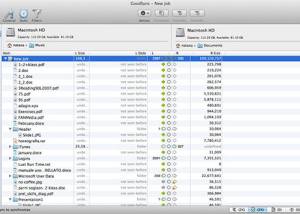 What do you think about GoodSync for Mac?

Last versions of GoodSync for Mac

Downloads of GoodSync for Mac freeware

Get the latest freeware updates and news directly in your inbox. By clicking on "Subscribe" above, you are agreeing to the Terms of Use and the Privacy Policy.
© 2022 TopFreeware  |  All rights reserved.
created by FAUST